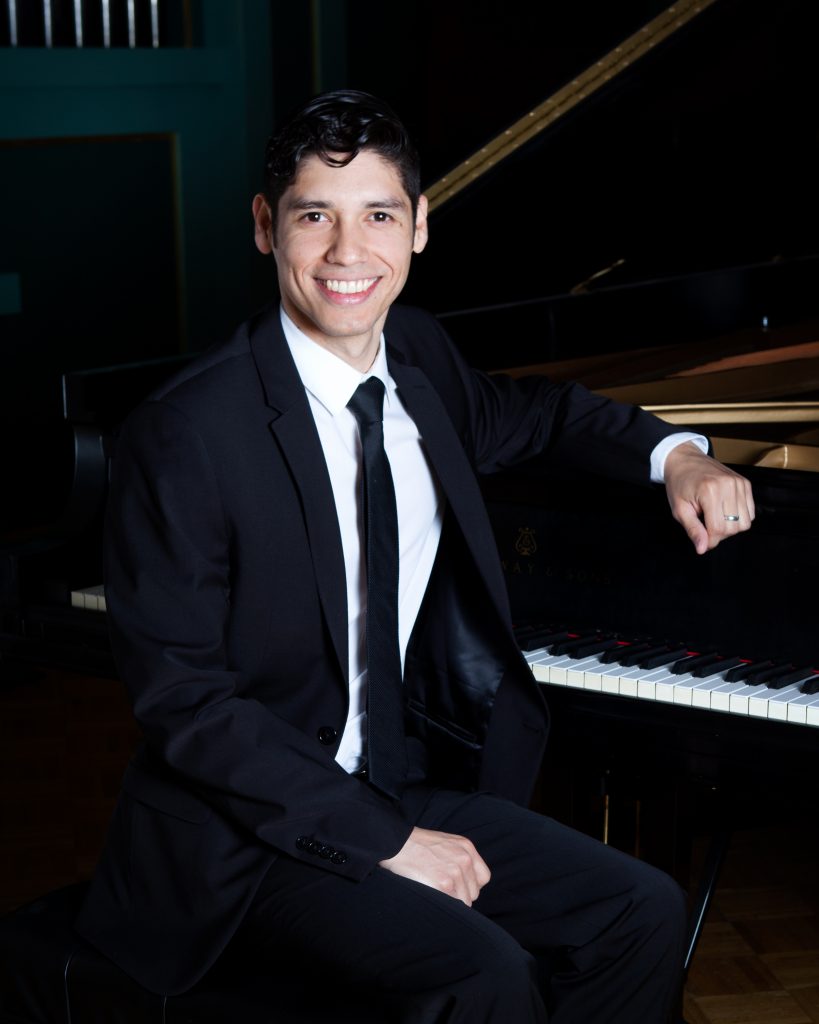 César began studying piano and music theory at the National Conservatory of Music, successfully finishing the first 5 years. He continued his music studies at Miranda Music School, taking harmony classes with his music mentor Mº José Luís Miranda and piano lessons with Mr. Pablo Yegros.
In 2010, he successfully finished the music theory and choir classes at APA (Autores Paraguayos Asociados) with Mº José Luís Miranda, graduating with a superior teaching degree in music theory. Later, in April 2012 he graduated with a degree in piano.
His thirst for knowledge to improve his technique and interpretation has led him to take private lessons with professor Balbina Salcedo, master classes with Pianists Miriam Braga (Brazil), Mº Pablo Yegros (Paraguay), Mº Pierre Blanchard (France), Mº Miguel Baselga (Spain), Mº Michael Dorner (Germany), and Mº Tamas Kery (Hungary).
He was admitted with a full scholarship to be part of the 7th edition of Musical Camping Mamorei, at the Mamorei Ybycui country house, Paraguay, organized by Sonidos de la Tierra and the Tierra Nuestra Foundation. He also participated at the 1st International Piano Convention “La Música Latinoamericana para Piano” (Latin American Piano Music), held in the Department of Music “Carlos López Buchardo” – IUNA in the city of Buenos Aires Aires, Argentina, among other national piano festivals.
He began his teaching career at the Miranda Music School in 2010. For two years he taught at the institute as well as privately in Asunción and his hometown city, Capiatá.
In 2012, he began his university studies at Pittsburg State University in the city of Pittsburg, Kansas, United States, after being awarded a scholarship through the music department. He graduated in 2017 with a Bachelor Degree in Music with an emphasis on Piano Performance and a minor in Voice. During those 5 years, he and his colleagues successfully taught and organized the first annual piano recital of the preparatory school of music. His main goal was to prepare young students from the area to get a higher level of education in music.
A student of Dr. Reena Natenberg in piano and Mr. Patrick Howle in voice, César has presented several solo piano and voice recitals, performed in different venues in the USA and in Paraguay. In addition to piano recitals, he has performed an opera (L’elisir d’amore) in which he played the lead role (Nemorino) in the university’s opera workshop along with the Southeast Kansas Symphony.
Throughout his studies at Pittsburg State University, César performed in several concerts as a soloist, collaborative pianist, and chamber musician for university and non-university related events. He was part of a university choir tour to England and Wales under the direction of Dr. Susan Marchant, where he had the opportunity to sing in places such as Cardiff, Bath, and Gloucester, and perform the Ordinary Mass.
Advocating the Paraguayan piano and voice literature was always his passion. Therefore, Paraguayan classical songs were always featured in most of this solo performances. At the moment he is working on recording and scoring new piano arrangements on traditional Paraguayan folk songs.
César is currently living in Paraguay with a private studio of around 20 young, promising pianists, and plans to perform as a soloist, in chamber ensembles, and a collaborative pianist throughout the year.