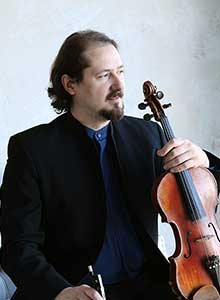 Originally from Novosibirsk, Russia, Boris Vayner has been enjoying a diverse career in music as a violist, educator and conductor. As a member of the Grammy nominated St. Petersburg String Quartet since 2005, he has been intensively touring throughout North America, South America, Europe and Asia. The highlights of his career include performances at Lincoln Center, Library of Congress, Amsterdam Concertgebouw, Manchester Bridgewater Hall, Dublin National Concert Hall, London King’s Place, St. Petersburg Philharmonic Great Hall, and appearances at such festivals as Schleswig-Holstein (Germany), MIMO (Brazil), Buxton (England), Fishguard (Wales), Music Mountain, Rockport, and Mainly Mozart in San Diego, among others. Boris Vayner has collaborated with such internationally renowned artists as Leon Fleisher, Michael Tree, Peter Donohoe, David Shifrin, Misha Dichter, and Stephanie Chase. He is also a member of the St. Petersburg Piano Quartet that debuted in New York in May 2014.

Boris Vayner has joined the faculty of the University of Kansas in August 2017. Prior to this, he served as an adjunct faculty and a member of the quartet-in-residence at the Wichita State University. He also served as a sabbatical replacement for the viola professor and the director of the Luther College Philharmonia at the Luther College, Decorah, for the spring semester 2013. Boris Vayner gave master classes at many educational institutions in the US and around the world, including San Francisco Conservatory, University of Toronto (Canada), Groton School, Stephen F. Austin State University, and Colima University (Mexico). He has been on faculty at many international summer festivals, including St. Petersburg International Summer Academy, Montecito Music Festival, Musica Mundi Festival, and Alion Baltic International Music Festival.

Boris Vayner was a founder and a director of the Suprima Chamber Orchestra comprised of students of the Wichita State University. He successfully led the orchestra to performances in Russia, in 2012, and at the Barge Music in New York, in November 2014. For the performance in New York the Suprima Chamber Orchestra collaborated with the conducting and violin prodigy, Jonathan Okseniuk. As a conductor, Boris Vayner has appeared with the University of Missouri Kansas City student orchestra, Luther College Philharmonia, Hays Symphony Orchestra, and Uspensky School of Music student orchestra (Uzbekistan).

Besides performing music, Boris Vayner is an avid arranger; his arrangement of Bach Chaconne for string quartet was performed live on BBC 3 radio station in London, in July 2012. In 2018, he was commissioned an arrangement of Florence Price Piano Concerto for piano and string quartet that was premiered the same year.