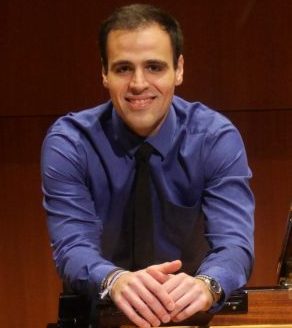 Pianist Alejandro Avila was born in Asuncion, Paraguay, and began his piano studies at the age of 7. Concluding his conservatory studies in Asuncion, Alejandro was awarded a full scholarship to pursue his Bachelor of Music in Piano Performance degree at São Paulo State University, in Brazil, where he studied with renowned Brazilian professors Dr. Cláudio Richerme and Dr. André Rangel. After finishing his studies in São Paulo, Alejandro got a full assistantship position at Central Michigan University, where he worked as a piano instructor of piano class and private lessons, as well as a collaborator for choir, instrumentalists, and singers. During these two years, Alejandro pursued his Master of Music degree in Piano Performance studying with Portuguese pianist Alexandra Mascolo-David.

Alejandro is a recipient of several prizes, grants, and music awards. Among these are the first prize at Rosa Mistica competition in Curitiba, Brazil when he was 15, the first prize at Momento Musical competition in Asuncion, Paraguay, in 2012, as well as two Silver Medals at the KMTA Honors competition at the graduate level in Emporia, KS in 2018 and  in Lawrence, KS in 2019. Alejandro is also a recipient of the Koch Cultural Trust grant for his work at the Cortona Sessions for New Music, in Italy,  as well as a Reach Out Kansas grant, for his collaborative work with The Meadowlark Project.

More recently, Alejandro received his Doctor of Musical Arts degree from the University of Kansas in 2020, after defending his dissertation Iguazú:  A Collection of South American Piano Pieces, a research project passed with Honors that focuses on the incorporation of pedagogic pieces outside the main canon. Currently, Alejandro works as an adjunct faculty and collaborative pianist at Washburn University as well as a staff accompanist at The University of Kansas, working with the voice, string, choir, and opera departments at both institutions. Dr. Avila is also faculty of piano and theory for all levels at Language and Music House of Kansas City. Alejandro keeps an active and successful career as a recitalist, both in solo and collaborative settings. Dr. Avila also keeps a piano studio in Lawrence, KS.

An enthusiast of chamber music and Latin-American repertoire, Alejandro performs regularly with singers and instrumentalist of the Kansas and Missouri areas. Premiering new works by living composers and reviving lesser-known compositions are among Alejandro’s main endeavors as a contemporary artist. He is a co-founder of The Meadowlark Project, a new music ensemble that brings Kansas-based art songs into new audiences and small communities within the states of Kansas and Missouri. In his free time, Alejandro enjoys cooking, running outdoors, and playing keyboard with his Lawrence-KC-based Brazilian band Balacobaco.