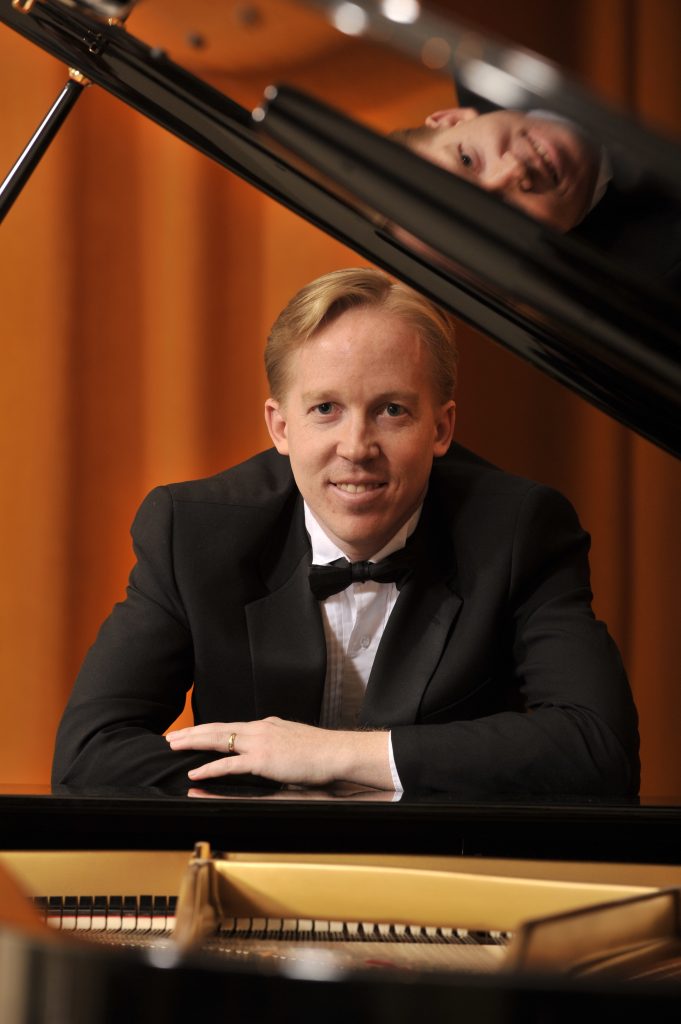 Piano Faculty at the University of Missouri-Kansas City Conservatory

Jeffrey Savage, currently a faculty member at the University of Missouri-Kansas City Conservatory, is active internationally as both soloist and chamber musician and has been praised as “fearless” (Straits Times, Singapore), “joyful and inspiring” (American Record Guide), and “breathtaking” (Navona/PARMA). Recent performances include China’s Wuhan Conservatory (Liszt’s Totentanz), premieres of Daniel Ott’s Fantasy on a Falling Line in New York and Vietnam, and broadcasts on national NPR stations.

A member of the piano duo 88SQUARED with his wife, Jeffrey was invited by the composers to record the complete two-piano works of Daniel Ott (Navona/PARMA) and Lowell Liebermann (Albany Records).  88SQUARED commissioned and premiered the Sonata for Two Pianos, (2011) by Liebermann, who called the duo “a composer’s dream.”

Equally at ease in the music from Bach to Messiaen, he especially enjoys performing the works of Liszt. Savage has performed in Alice Tully Hall, Carnegie’s Weill Hall, at festivals across the United States, and with orchestras in New York, Pennsylvania, Louisiana and in the Pacific Northwest. He has given performances and masterclasses nationally and at major conservatories throughout Asia, including China, Singapore, Vietnam, Thailand, Malaysia, Japan, and India.

Jeffrey has won top prizes and been recognized in national and international competitions, including the Missouri Southern International, Fort Collins, and Wideman Competitions. His piano duo 88SQUARED won the Ellis Piano Duo Competition and the Abild Prize in American Music, and received second prize and a Special Mention Prize at Concours Grieg International Piano Competition (Oslo).

Students of Jeffrey Savage have been accepted at prestigious festivals and programs across North America and Europe. His students have been awarded academic/artistic fellowships from the Fulbright Program and presented at national conferences including MTNA and the Collegiate Piano Pedagogy Symposium. Before teaching at the UMKC Conservatory, Dr. Savage was professor and keyboard area coordinator at Washington State University for fourteen years. He holds master’s and doctorate degrees from The Juilliard School and a Bachelor of Music degree from the University of Colorado. His major teachers include Angela Cheng, Yoheved Kaplinsky, and Rudolph Barta.  He frequently presents workshops, and adjudicates at regional and national festivals and competitions.