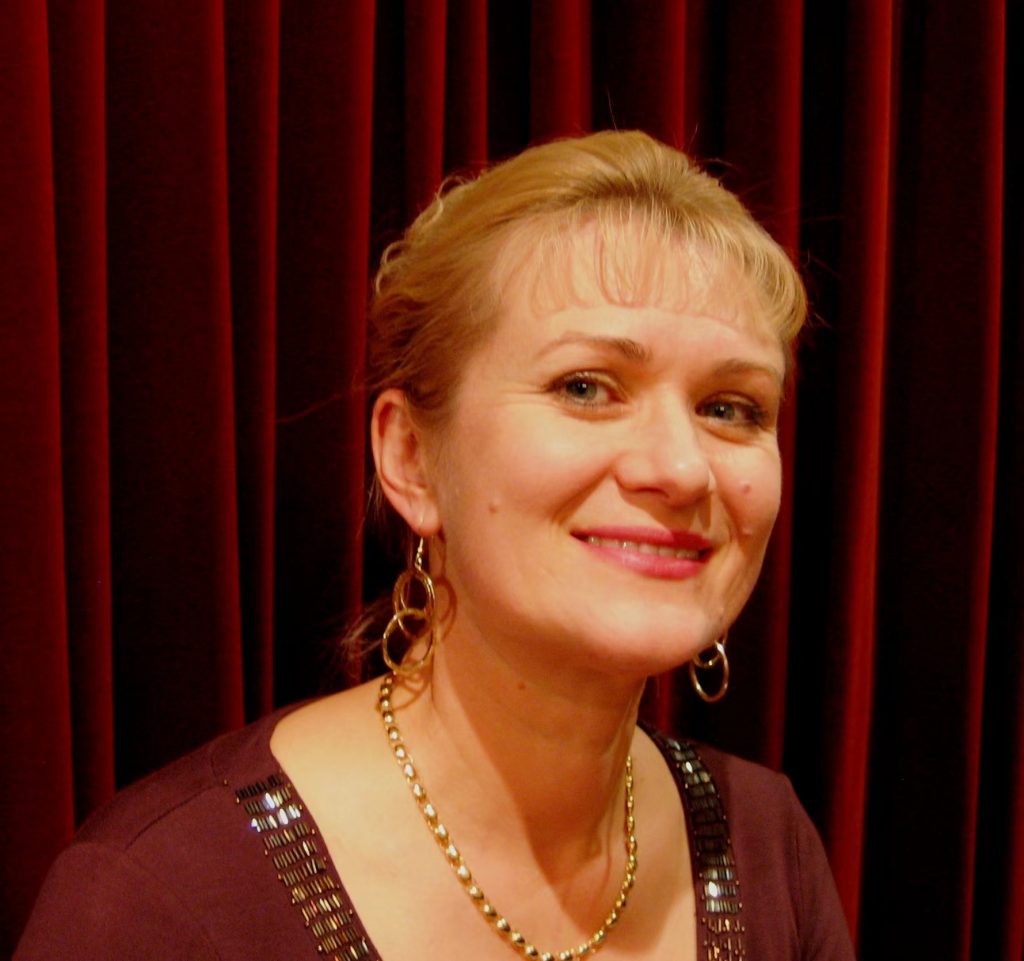 Russian born, Olga Kharitonova began her early musical training at  the age of six and studied at the College of Music in Moscow. She made her debut at the Tchaikovsky Hall at the age of 11.  Olga went on to gain her   degree at the Moscow Tchaikovsky Conservatory with first class honours where she studied under the guidance of   Alexei Nasedkin and Tigran Alikhanov. As both soloist and cnamber music musician , she was a  multi award winner and appeared on television and radio in Russia and abroad. Olga’s performance at the prestigious ‘Moscow Autumn’ Festival was hailed by Soviet Myzika as ‘ the revealation of  a true artist’.

Her biggest successes, however,  were as a member of the  Piano Duo with her husband, Igor Machlak. After two years of postgraduate studies at the Conservatory, the Kharitonova – Machlak team went on to establish a successful international career. The Duo was a prize-winner of many major competitions, including victory at the National ‘Balakierev‘competition in 1990; first prizes at the International ‘Musica da Camera‘ competition in Italy in 1991 and at the International Piano Duo competition in Tokyo, Japan in 1994. The Duo was also second in Italy in 1992  and was amonst finalists in Italy in 1990 and the USA in 1993. These successes led to numerous concert invitations in Europe and Asia.” Utterely mesmerizing!”- wrote the reviewer in ‘La Sicilia’ about their recital in Italy. Young musicians had privilege to have the advice and guidance from the Russia’s ‘Golden Duo’- Sorokina- Bahchiev as well as to share the concert platform with legendary Bruk- Taimanov Duo.

In addition to active concertising, Olga taught piano and chamber music at the Moscow Scriabin College of Music.

Since 1995 Olga Kharitonova based in Melbourne and continued to develop her career as a performer and as a teacher. She has performed with many well-known performers at  major venues in Australia and   has appeared at Adelaide, Castlemaine and Port Fairy festivals. ‘A fine exponent of Russian style of piano playing, Olga Kharitonova is a joy to watch as well to listen to.’- wrote the critic in Adelaide.

Igor and Olga Piano Duo established itself as one of the leading ensembles in Australia, frequently being broadcasted on ABC and SBS radio. After more than two decades playing together, Olga and Igor continuously search to extend their repertoire which has resulted in creation of their own arrangements of masterpieces as well as numerous world premiers of the newest compositions. And the audiences and critics seem to love it. “It was world class!” noted the critic in The Age after their performance in Melbourne. “Their playing was brilliant, sensitive, almost sensuous. I was hooked!” exclaimed an enthusiastic admirer exclaimed in her letter to Music in Australia.Igor and Olga’s very busy performance schedule has taken them to various parts of the globe , including many visits to China and Southern Eastern Asia as well as return trips to Russia.

Olga Kharitonova has been a member of the piano staff at the University of Melbourne’s Faculty of Music since 1998 where she teaches piano and co-ordinates Piano Duet ensemble.